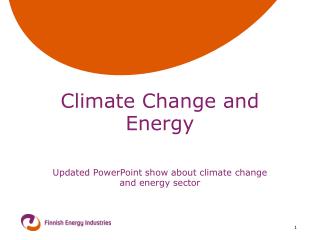 Of Climate Change, Coal Plants And The The Post Fossil-Fuel Era - . focus the nation pueblo, colorado leslie glustrom for

Weather…Climate… Climate Change… Ozone Depletion… - . …what does it all mean?. question: what’s in the

Climate Change – A Primer on Energy and the Environment - Or: see you real soon, i’m off to the thirty years war