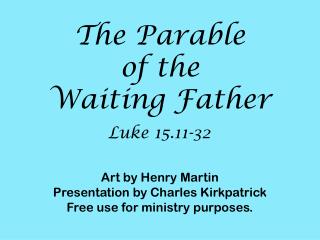 The Parable of the Waiting Father. Luke 15.11-32. Art by Henry Martin Presentation by Charles Kirkpatrick Free use for ministry purposes. There once was a man who had two sons. The older son worked hard and obeyed all that his father told him to do. Dying to Live: Parable of the Rich Fool Luke 12:13-21 - . the call of this parable die before you die die to control die