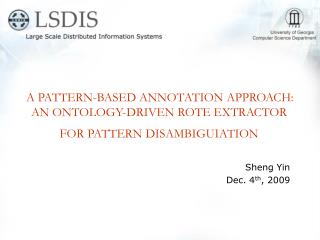 HOLDING - . terminal learning objective : identify the various elements of holding procedures to include the atc

The Ontology of Experiments - . barry smith http://ontology.buffalo.edu/smith. plan. the experiment ontology the ontology

The Net Worth of an Object-Oriented Pattern - . practical implications of the java rmi. adrian german lecturer, computer

AIR FORCE FOOTBALL - . pattern read cover three. why pattern read. match up underneath coverage to route being run as

The Joy of Ontology - . suzanna lewis smi colloquium april 20 th , 2006. sections. why make an ontology what is an

The Sanctuary - . and the book of revelation. exodus 25:8 and let them make me a sanctuary; that i may dwell among them.

Rip Van Winkle - . a new critical approach and a (new) historical approach. starting questions. do you like the story?