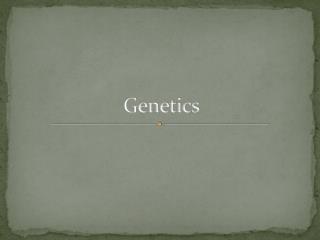 Genetics. How did Morgan’s research build upon Mendel’s observations? Morgan used dihybrid crosses in fruit flies to study a new pattern of inheritance that revealed gene linkage in phenotypes. His results did not always follow Mendel’s 9:3:3:1 pattern.

Genetics - . what are the key components of chromosomes?. dna -heterochromatin -euchromatin proteins found in nucleus you

Genetics - . chromosomes . autosomes : chromosomes that do not contain genes that determine the sex of an individual sex

Genetics - . notes 3. test cross. how do we know if an organism that shows a dominant trait has a two dominant alleles or

Genetics - . chapter 11. genetics. genetics is the study of heredity every living thing- plant or animal, microbe or

Genetics - . intermediate traits. traits. most traits are controlled by more than 1 gene most traits have multiple

Genetics - . in the mid-19th century, a man named gregor mendel began to experiment with pea plants. he observed that pea

Genetics - . by aimee chavez. heredity. the passing of traits from parents to offspring. gregor mendel known as the

genetics - . chapters 11 and 14. genetics. the scientific study of heredity- how traits are passed down to offspring.

Genetics - . chapter 4. genetics. is the science of heredity. heredity is the transmission of genetic or physical traits

Genetics - . a psychological perspective. behavioral genetics. understanding how both genetics and the environment

Genetics - . topic 4 and 10. why sex????. http://www.pbs.org/wgbh/nova/miracle/program.html. chromosomes. chromosomes are