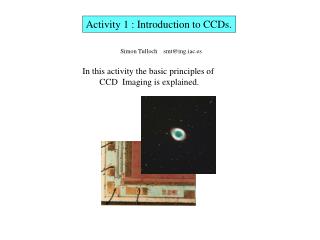 Activity 1 : Introduction to CCDs. Simon Tulloch smt@ing.iac.es. In this activity the basic principles of CCD Imaging is explained. What is a CCD ?. Charge Coupled Devices (CCDs) were invented in the 1970s and originally found application as

SDSS - . the sloan digital sky survey. mapping the universe. the sdss is two surveys. the fuzzy blob survey. the squiggly

Oral contraceptive pill – what for who? - . mark wilshere 2011. content. introduction – the importance of the matter

Chapter 1 Introduction To Exercise Physiology - . how do you define exercise?. what is physical activity? body movement