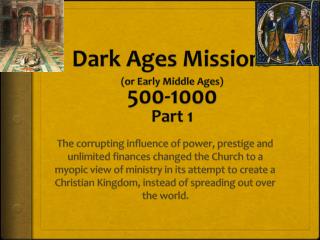 Dark Ages Missions (or Early Middle Ages) 500-1000 Part 1. The corrupting influence of power, prestige and unlimited finances changed the Church to a myopic view of ministry in its attempt to create a Christian Kingdom, instead of spreading out over the world.

Session 15 Polities of the Early Middle Ages A review The High Middle Ages Its features - . t h e a m e r i c a n u n i v

Slovak historiography (not only of the Early Modern period): traditions, trends, perspectives - . tradition: the

The Dark Ages - . western europe feels the pain. what happened to the world?. rome collapsed disruption of trade downfall

Deerlake Middle School History Fair 2012-13 - . what’s so great about history fair?. you choose your own topic! you