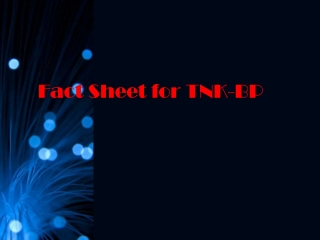 Name: TNK-BP Nationality: Russian Federation Nationality: United Kingdom WebAddress: http://www.tnk-bp.com/ General: TNK-BP is a leading Russian oil company and is among the top ten privately-owned oil companies in the world in terms of crude oil production. The company was formed in 2003 as a result of the merger of BP’s Russian oil and gas assets and the oil and gas assets of Alfa, Access/Renova group (AAR). BP and AAR each own 50% of TNK-BP.

Fact or Opinion - . l.krauser. fact. the sun is a renewable resource. opinion. mr. southard is nice. fact. a

TELSTRA FACT SHEET - . nbn rollout information. this fact sheet is designed to inform you about the different types of