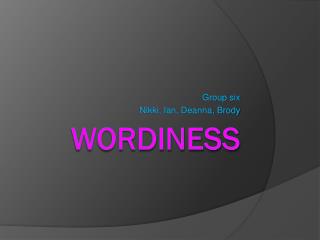 Group six Nikki, Ian, Deanna, Brody . Wordiness. What is wordiness?. Wordiness is the overuse of unnecessary words that create confusion for readers. Too many words distract readers and draw away from the original topic, kind of like pink text.

Writing Concise Sentences - . by worth weller. in a

Reducing Wordiness Practice - . 1. eliminate words that say nothing. you may use different words. it is necessary that we

Conciseness - . the art of amazing writing. definitions ( www.thefreedictionary.com ):. concise - expressing much in few

Avoiding Wordiness! - . material from the bedford handbook. what is a wordy sentence?. a long sentence is not necessarily

Conciseness: Methods of Eliminating Wordiness - Brought to you by the purdue university online writing lab . conciseness:

Wordiness - . there are many ways to take a reduction in the number of words you may or may not use in your composition

Reducing wordiness - The means by which you can and should edit out extra, unnecessary words, while making sure that your

Wordy sentences-Verbose - . concise sentences are preferred. regardless of the fact that gatsby had become a millionaire

Wordiness - . an introduction to wordy words for the presentation slideshow that gives the detailed description on how to

Vocabulary Notes: We are going to learn some wordy words here – so Get Ready For IT! - . prep: take out a sheet of

Review from Yesterday - . what does redundancy mean? what is an example of redundancy? how do you revise it?. what are