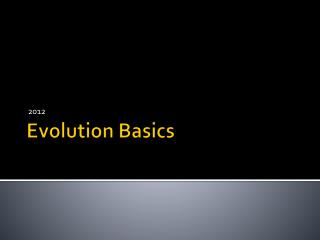 2012. Evolution Basics. Why learn about evolution in Env . Ed?. Extinction is important. -95-99% of species that have ever existed are now extinct -this allows “an opening” for other creatures to develop -the current mass extinction event is not natural which causes a concern for some. Evolution and Growth of Muslim Society in Subcontinent - . in context of subcontinent dated:22-09-2013 by muhammad ali

The evolution of Geriatric Medicine in the UK: Are there any lessons for Taiwan? - . 12 th january 2008 dr david oliver

Back to Basics in Supply Chain Management - . rick roelecke director of quality assurance. the evolution we designed.

Basics of Natural Selection Topic 3035 - . by jonathan edgerly. the father of natural selection and evolution. darwin