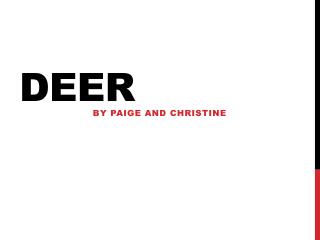 Deer. By Paige and Christine. Land and Climate conditions. Deer is best farmed on hill country a temperate climate allowing year-round grazing of pasture, with some additional feed in winter, which was a management system that deer could adapt to. DEER - . i chose deer because i have never gotten a good look at a deer, and i only get signs of one. why deer are hard

DEER - . the animal i researched was a deer. deer are mammals. they live in the woodlands of new york state. physical

Deer - . matthew. some deer have white tails. they are mammals. deer are strong. deer are brown and white. deer can weigh

Deer - . by kendra and sophia. our animal is a deer. a white tail deer coat is reddish, brownish. baby deer. baby deer

Deer - Kenley dunn. deer. what does the animal eat?. deer eat grasses such as shrubs, buds, leaves, fruit, wheat and

DEER - . by: ethan. charicteristics. deer eat grass. they use there mouth to pull and chew grass. it runs with its front

Deer - . by: kathleen cordell. introduction. did you know deer can jump really far? they can jump over streams 30 feet

Deer - . 3 different types of deer in ireland. a large deer brownish-red coat and white patch on his tail called red

Deer - . by bryce monteith. my questions. how is a deer born? at what age do they get antlers? do they like tropical, hot

DEER - . by: christine redthunder. description. a deer is a mammal with 4 hooves. a deer is about 4 feet. and they have

Deer Out- Natural Deer - Http://www.deerout.com/ deer out is 100% all natural ingredients with pleasant smelling, super

DEER - . made by kohl, kelli and adrianna. food. during the summer they will be eating your soybeans and alfalfa . then,

Deer - Jacob jordan. deer. what does the animal eat?. deer eat grasses such as leaves chews its cub. where does the

Deer - . 3 different types of deer in ireland. a large deer brownish-red coat and white patch on his tail called red

Mule Deer - . by: kyle. what it eats . food: jojoba, cat claw, buck bush, and other shrubs and grasses. how big my animal