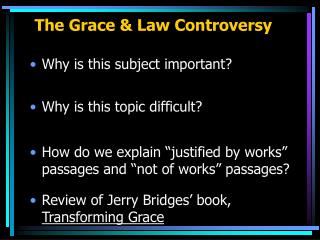 Amazing Grace, My Chains Are Gone - . amazing grace how sweet the sound that saved a wretch like me i once was lost but

1) By grace I’m saved, grace free and boundless; my soul, believe and doubt it not. Why stagger at this word of promi

W ELCOME TO N EW T ESTAMENT S URVEY - . amazing grace amazing grace! how sweet the sound that saved a wretch like me! i

The recombinant DNA controversy - . “those who disregard the past are bound to repeat it” george santayana. herb

GBI Basics of Grace Summer 2010 - . an overview of systematic theology. anthropology: what is man like?. a study of the

The word gratitude is derived from the latin root gratia meaning grace, graciousness, or gratefulness