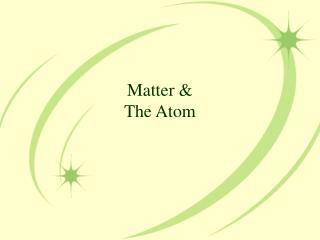 Matter & The Atom. Matter. The term matter describes all of the physical substances around us: your table, your body, a pencil, water, and so forth. Matter. Anything that has mass and takes up space (has volume) Includes all things that can be seen, tasted, smelled, or touched

What is Chemistry? - . the study of the properties of matter and the changes that matter undergoes. what is the modern

Atoms, Elements and the periodic table - . matter. all matter is composed of atoms and groups of atoms bonded together,

Unit 3: Atom - . atomos: not to be cut. the history of the atom and the atomic theory. atomic models. this model of the

Science Module - . 8 th grade. taks objective 3 . the student will demonstrate an understanding of the structure and

Matter - . anything that has mass and takes up space (volume). properties of matter. physical property any property of

MATTER - . yes. no. can it be physically separated?. mixture. pure substance. yes. no. yes. no. is the composition

Matter - . matter : anything that takes up space and has mass. five states of matter solid, liquid, gas, plasma,