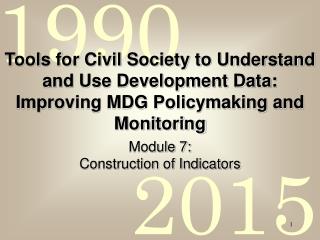 Tools for Civil Society to Understand and Use Development Data: Improving MDG Policymaking and Monitoring. Module 7: Construction of Indicators. What you will be able to do by the end of this module:. Understand the major types of quantitative indicators, and how they are formulated CONSTRUCTION INSURANCE - . a very warm welcome to all delegates let us work together and pool our knowledge for the

Student’s Brain and Group Psychology - . or a  teacher’s bag of psychological classroom tricks. our day. module 1

SCHOOL MANAGEMENT SYSTEM In this Software, we have 5 modules. They are: ADMIN MODULE - Student module staff module