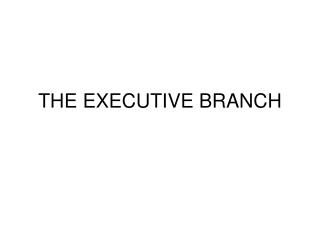 THE EXECUTIVE BRANCH. Who Makes Up The Executive Branch. & The Cabinet. Who elects the President?. ?. How the Electoral College works. The Mechanics. The Presidential Election should be viewed as 51 separate elections each with a “winner take all” system APG Unit III Review - . fall 2013. which branch was expected to execute acts of congress and protect against mass

The Judicial Branch - . chapter 8 section 1 clues. the court case where detained japanese americans were released and

UK Membership Update - Branch conference 2012 welcome thought for the day ‘’ tell me and i'll forget; show me and i