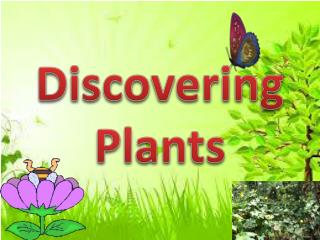 Discovering Plants. Parts of plant. Parts of plant. An aerial and upright part of the plant that usually bears the leaves, flowers, and fruits. A reproductive organ of the seed bearing plants . Are usually subterranean organ of a plant used for the anchorage to the soil. . leaves. Discovering Collection - . search a bunch of reference sources at once!. sharon flesher 2010/2010 –

Discovering Storms - By caitlin brennan. discovering storms. next. click on the button that describes you!. teacher.

Discovering Plants - . instruction:. there are 6 butterflies,6 bees, and 6 flowers each picture contain question, pick a

Discovering Australia - . Б2108а-2. australia is the biggest island and the smallest continent in the world, the lowest

DISCOVERING TRUTH - . how god helps us discover the truth about ourselves how we can get in the way of that discovery and