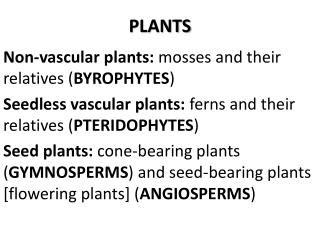 Plants are Plants - . by jack johnson. what is a

Plants: Adaptations of Plants - . i. establishment of plants on land. 1. dominant group of organisms on land due do

PLANTS - . objective 2 and 3. tek 4 the student knows that cells are the basic structures of living things and have

Plants - . the study of plants is called botany. multicellular eukaryote produce their own food through photosynthesis

PLANTS - . specialized plant cells. leaves. most leaves are thin and flat, an adaptation that helps them capture sunlight

Plants - . a freshmen overview ya dig. what are plants?. plants are multicellular : made of more than 1 cell

Plants - . sc.912.l.14.7 relate the structure of each of the major plant tissues or organs to physiological process. why

PLANTS - . name the plant part. take in water and nutrients from the soil. roots. fruits and seeds form inside. flower.