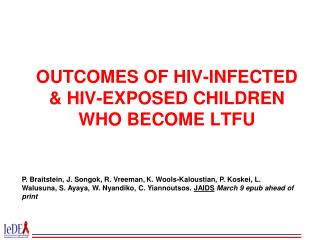 Child Outcomes Quality Assurance - . january 8, 2010 presented by sherlock center on disabilities at ri college and the

Barry M. Lester, PhD Brown Center for the Study of Children at Risk - Substance exposed newborns: time for policy to

Guidelines for the Use of Antiretroviral Agents in Pediatric HIV Infection - . hhs panel on antiretroviral therapy and

Replication of Viruses - . dr.azme mahafza. the pathological effects of the diseases caused by viruses result from the

Street Children in Tanzania - . presentation made to the arusha caucus for children’s rights 4 th august 2004, by

Results and techniques of the treatment of infected nonunion of the long bones, a report of 40 cases - Ebrahimzadeh