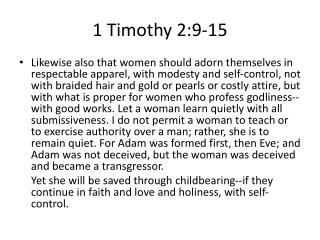 Building Godly Character - . grow you up in the lord. becoming more like god. 2 corinthians 3:16 but whenever anyone

1 Timothy 2 Model of Exegesis But is it a Model for Women in Ministry? - . hermeneutical problem. this passage is a model

A Godly Leader Serves with Humility and Tears - “you know how i lived the whole time i was with you, from the first

1 Timothy: Overview - “… i write so that you may know how you ought to conduct yourself in the house of god, which is

The Character of a Godly Man Psalm 112 - . happy father’s day! the bible gives us clear characteristics of what god is

2 Timothy 3:16-17 - How to get the most from studying your bible : all scripture is god-breathed and is useful for