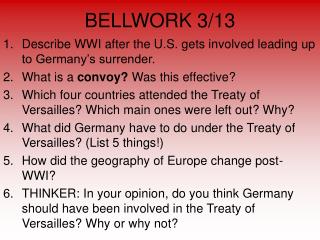 BELLWORK 3/13. Describe WWI after the U.S. gets involved leading up to Germany’s surrender. What is a convoy? Was this effective? Which four countries attended the Treaty of Versailles? Which main ones were left out? Why?

BELLWORK - . get a handout from the front and use it to answer the following questions: what was the enlightenment? how

Bellwork - . .have your notes ready to go. on an index card create this graphic organizer and be ready to fill it out. ~p

Empirical Rule (3 Sigma Rule) - . a statistical rule stating that for a normal distribution almost all data will fall

Bell Work: Tuesday 12/8/09 - . a cowboy drops his gun while riding his horse at a fast gallop. in the absence of air

The Daily 5 Overview - . a guide for parents &quot;the daily 5 and cafÉ are trademark and copy written content of

Agenda: Monday11/15/10 - . reminders: homework due friday notebook due friday projects due next monday online quiz due by

Bell Work 8/29/13 - . on your desk you should have: agenda (opened to pride card) interactive notebook pencil/pen. what

Aug 12 th Bell work/ Warm Up: - . quietly sit in assigned seats. take out your portfolio cover designs from friday and

Friday: Bellwork - . ifc. bellwork : tuesday. t/f energy from the sun can be used to make electricity all of earths