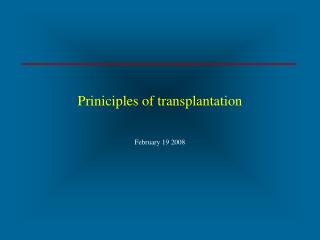 PRINICIPLES OF CONSUMER BEHAVIOUR - . choice and utility theory:-. what is utility ? utility means satisfaction. it is a

IMMUNOLOGY OF TRANSPLANTATION - . prof.mohammed al- homrany. major concepts in transplant immunology. how does the immune

Foundational Priniciples of CATECHESIS: The Forming of Discipled Lives - . catechesis always begins in the culture

Transplantation - . and its use in gene technology. by christopher schlemm and ilja klebanov. introduction general

Transplantation - Transplant immunology . as early as first half of last centaury principle of graft failure thought to

Transplantation - 0. transplantation. rejection of foreign tissue grafts is due to immune responses to alloantigens on