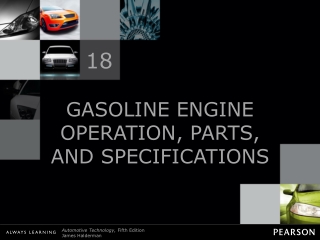 18. GASOLINE ENGINE OPERATION, PARTS, AND SPECIFICATIONS. Figure 18-1 The rotating assembly for a V-8 engine that has eight pistons and connecting rods and one crankshaft. Engines, Motors, Turbines and Power Plants: an Overview - . presentation for egn 1002 engineering orientation. what to

The Little Engine That Could? - How the oklahoma economy is performing after the “great recession”. the little engine

Small and Large Engines - . by: garrett kurneck. history. people made blueprints of internal combustion engines up until

Solar Stirling Engine - . introduction: stirling engine. it is an external combustion engine that works according to the

OBJECTIVES - . after studying chapter 4, the reader should be able to: prepare for ase engine performance (a8)

Engine Diagnosis and Service: Cylinder Head and Valvetrain - . chapter 52. objectives. disassemble a cylinder head in the