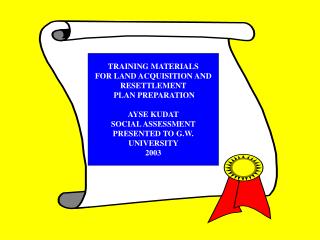 TRAINING MATERIALS FOR LAND ACQUISITION AND RESETTLEMENT PLAN PREPARATION AYSE KUDAT SOCIAL ASSESSMENT PRESENTED TO G.W. UNIVERSITY 2003. A resettlement action plan (RAP) is a document specifying procedures that the responsible agency will follow and the actions it The Draft Land Acquisition and Rehabilitation and Resettlement Bill (LARR), 2011 – An Overview - . ministry of rural

Preparation and Training - . marty woll n6vi. personal preparation. self and family : have a disaster plan! where to

Land Preparation Operations - . part 1: understanding the palaycheck system. can rice grow in this field?. what do you

Land Preparation Machinery - . part 1: understanding the palaycheck system. machines. the plow. the pump. the harrow. the

A2 Preparation Materials - . theories for exam preparation. theories that need to be researched. for the exam, you will

PREPARATION OF MATERIALS - . prepared by k.h.m. mohamed yaseen. phase diagrams. a phase is a state of matter with