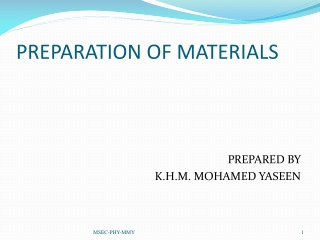 PREPARATION OF MATERIALS. PREPARED BY K.H.M. MOHAMED YASEEN. Phase Diagrams. A phase is a state of matter with the following characteristics: It has the same structure or atomic arrangement throughout It has roughly the same composition and properties throughout. Business Case Preparation - . based on materials prepared by marty chakoian marty@semeron.com. why do a business case?.

Preparation - . fundamental question: are you ready?. preparation. when are you prepared?. when you have the ability to