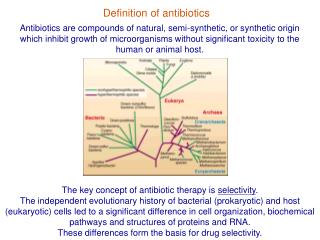 Definition of antibiotics. Antibiotics are compounds of natural, semi-synthetic, or synthetic origin which inhibit growth of microorganisms without significant toxicity to the human or animal host. . The key concept of antibiotic therapy is selectivity .

Antibiotics - Overview if bacteria make it past our immune system and start reproducing inside our bodies, they cause

Antibiotics - Step 1: how to kill a bacterium. what are the bacterial weak points? specifically, which commercial