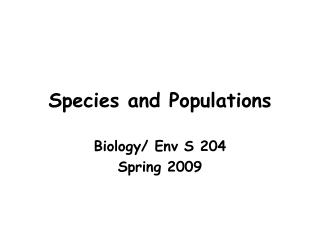 Population – group of individuals of the same species - Living in the same area, potentially interacting. community

POPULATIONS AND ECOSYSTEMS - . organism / individual. any living thing. one member of a species or population. ex: a

POPULATIONS - . definition: all the members of a species that live in one place at one time. properties of populations.

The Evolution of Populations - . populations. a group of organisms of the same species living in the same area at the

Species &amp; Populations with little genetic diversity are at risk for extinction

POPULATION ECOLOGY - . unit 5. 14.1 – characteristics of populations. habitat : the place where an organism or species

Isolation of Populations - . factors such as selection and chance events can change the relative frequencies of alleles

Characteristics of Populations - . recall…. habitat – the place where an organism lives species – organisms that

What is a species? Speciation? - . macroevolution: origin of new species; increases diversity species? population (or

Speciation - . species . one or more populations of individuals that can inter breed under natural conditions and produce

Geographic Ecology - . on islands and habitat fragments on continents, species richness increases with area and decreases