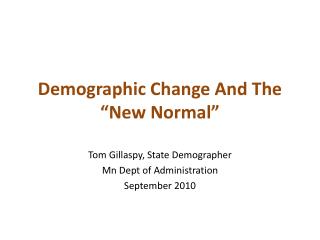 Demographic Change And The “New Normal”

Demographic Change And The “New Normal”. Tom Gillaspy, State Demographer Mn Dept of Administration September 2010. Minnesota Has Been Very Successful (Especially For A Cold Weather State at the End of the Road). Our economic growth rate has exceeded the national average

Demographic Change And The “New Normal”