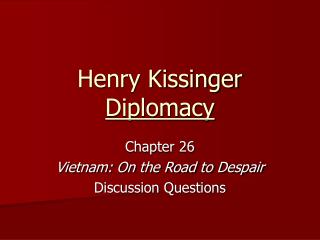 Henry Kissinger Diplomacy. Chapter 26 Vietnam: On the Road to Despair Discussion Questions. 1. (644) Assess Kissinger’s notion that guerrilla warfare was a “relatively new phenomenon” in the 1960s?. Diplomacy - Is it still called that when you threaten countries with war? . diplomacy. latin american independence. by

European Diplomacy - . during the period 1871-1914 which were the major powers  in europe and why?. germany, england,

American Diplomacy - . at the turn of the 20 th century. anti-imperialists disdain for european colonization democracy