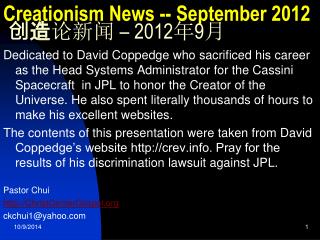 Creationism News -- September 2012 创造 论新闻 – 2012 年 9 月. Dedicated to David Coppedge who sacrificed his career as the Head Systems Administrator for the Cassini Spacecraft in JPL to honor the Creator of the Universe. He also spent literally thousands of hours to make his excellent websites. A DAY AS A DETECTIVE DETECTIVE DIALOGUE 5 SEPTEMBER 2012 - . introduction. a detective must start his/her day with proper