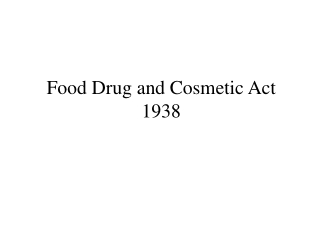 Food Drug and Cosmetic Act 1938. The Need for a new Act. Weakness of the 1906 Act Lack of standards for food products Developments in Science and technology Canning / Chemical analysis Expansion of cosmetics industry Sulfanilamide and other Tragedies. Food Tragedies. Food, Drug, and Cosmetic Act - . neel sonik james robbins. what is the fdc act?. an act introduced by congress in 1938

Pure Food and Drug Act - . cleaning up the food and drug industries. what about this product?. would you try these

The Federal Food, Drug, and Cosmetics Act - . ashley nunez 1a. the fdca is a set of laws passed by congress in 1938 it

The Pure Food and Drug Act &amp; Meat Inspection Act (1906) - . regulate the purity and quality of food and drugs. a