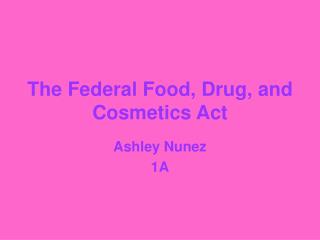 The Federal Food, Drug, and Cosmetics Act. Ashley Nunez 1A. The FDCA is a set of laws passed by congress in 1938 It was amended about 7 times between 1906-1935 It is a national law of the United States. This act was introduced by the death of more than 100 patients. Food, Drug, and Cosmetic Act - . neel sonik james robbins. what is the fdc act?. an act introduced by congress in 1938

Pure Food and Drug Act - . cleaning up the food and drug industries. what about this product?. would you try these

The Pure Food and Drug Act &amp; Meat Inspection Act (1906) - . regulate the purity and quality of food and drugs. a

CONSUMER ACT OF THE PHILIPPINES RELATING TO FOOD, DRUGS AND COSMETICS AND DEVICES

The Food and Drug Administration - . allison kotchman victoria gilbride. what is the fda?. an agency within the u.s.