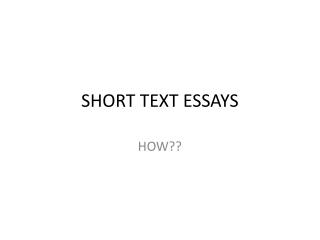 SHORT TEXT ESSAYS. HOW??. In short texts essays, you need to write about ideas from both stories/poems, then show some sort of comparison of the two.

Making Connections: Text to Self and Text to Text - . sylvia franklin reed 663.

5.RL.1 - Quote accurately from a text when explaining what the text says explicitly and when drawing inferences from the