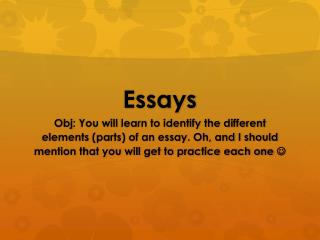 Essays. Obj : You will learn to identify the different elements (parts) of an essay. Oh, and I should mention that you will get to practice each one . Elements of An Essay. An essay consists of 5 main paragraphs: The Introduction 1 st Body Paragraph 2 nd Body Paragraph Comparison / Contrast and Cause &amp; Effect Essays - . for essay #3 – you will choose one format or the other. you

IELTS Task 2 Writing – advantages/disadvantages type essay - . planning…. which of these ideas could be included in

How to write an Essay???? - . super useful, cause forgie says so!. but why? boring…. boooooo. just because is not an

Writing essays - . merike luts. the types of argumentative essays. for and against computers in every classroom

World Literature Essays are FUN! - . four areas for focus: the introductory paragraph: thesis/argument/aims how to

Tackling the Essays - . steps in tackling the dbq. know the rubric quickly tackle the documents to look for categories to