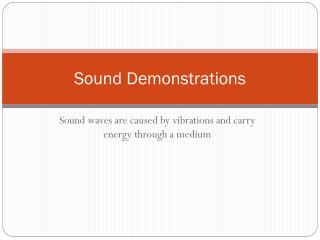 Sound Demonstrations. Sound waves are caused by vibrations and carry energy through a medium. What is a sound wave? BrainPop password and login mcbrayer. Humans hear sounds waves in a limited frequency range.

Chapter 26: Sound - . the origin of sound. all sounds are produced by the vibrations of material objects pitch – our

The Nature of Sound - . sound waves. sound waves carry energy through a medium as a longitudinal wave. the energy

Sound Demonstrations - . sound waves are caused by vibrations and carry energy through a medium. what is a sound wave?

The Nature of Sound - . new vocabulary. vibrations- back and forth movements of matter sound- form of energy that you can

What type waves are produced by the n oise from a tuning fork? - Warm-up: complete kwl chart on sound what do you know ?

Chapter 12 Sound - . hr physics. sound. vibrations in matter. no one need be around to hear it. composed of compressions

WAVES AND VIBRATIONS NOTES - . a wave is a vibration moving in time and space. it cannot exist in one place but must