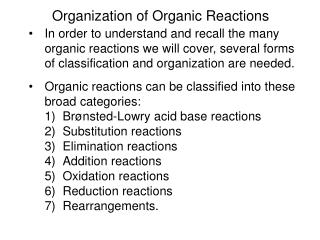 Organization of Organic Reactions. In order to understand and recall the many organic reactions we will cover, several forms of classification and organization are needed. Organic reactions can be classified into these broad categories: Brønsted-Lowry acid base reactions Substitution reactions

Organic Chemistry - . structures. what do i need to know?. translate between molecular, structural and ball and stick