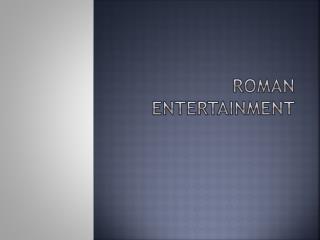 Roman Entertainment. Bread & Circuses. Free food and entertainment Funded by patricians to… Buy plebeian votes Keep the mob amused so they wouldn’t cause trouble. The Colosseum.

ROMAN CRIME AND PUNISHMENT - . roman crime and punishment prelude: of vestal virgins and prostitutes b. roman law: an

The Roman Emperors - . information for teachers. for students. objectives. given this powerpoint, students will be able

Roman Soldier Daily Life - . lesson by dean stevens. essay question. the roman empire was created on the backs of roman

Julius Caesar Obituary - . divide the class into six groups. each group plays the role of one of the following: group #1

Gkworld- Toys and Entertainment - Gkworld is an online store of toys and entertainment merchandise, we have vast