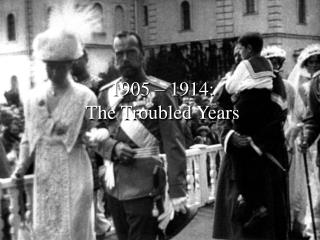 1905 – 1914: The Troubled Years. By 1912 even ‘Loyal’ Duma critical Had no power to change Tsar’s policies Criticism alone was no threat to Tsar. The Duma. Tsar Nicholas II needed to reform Russia to prevent another revolution 1906: First Duma meeting held hope

An Introduction to the First World War: 1905-1914 - . l/o – to identify and understand the chronology of the first

The troubled 19th century - . sept. 27, 2012. review. what did the government of chosŏn persecute the catholics, though

Troubled FISIM - . itsuo sakuma senshu university japan. t here is no such thing as unique reference rate. it is just

1905 Revolution - . by jean. bloom question. remembering what happen after the bloody sunday? understanding what was main

The Troubled Church - . by: ethan trokey, ashley mcintyre, and dominic knott. there once was a moose. what is the air

The 1905 Revolution - . “there is no god…there is no tsar!”. aims: to examine the key features and the consequences