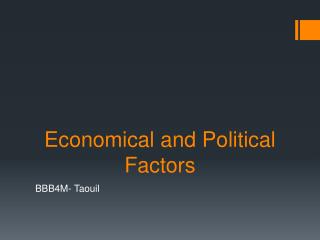 Economical and Political Factors. BBB4M- Taouil. Political System. Political system The type of government by which a country is run. Types of Political Systems. Democracy A state governed by all eligible members of the population through elected representatives. Post-Settlement Political and Economic Factors - Demands for revision of the paris settlement. objections from

ECONOMICAL AND SOCIAL RIGHTS - . economic , social and cultural rights are socio-economic human rights , such as the

Economical Skydiving - Skydiving is a risky and expensive adventure sport, you need to spend a good amount of money to

Political Linkage: Factors Work Through These Links to Influence Political Policy - . social movements. what are social