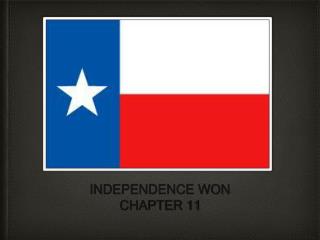 INDEPENDENCE WON CHAPTER 11. The road to San Jacinto. Santa Anna ordered his troops to burn every town and settlement in path Also believed that revolution was over, left armies in command of Filisola Thought capturing the temp govt. would be easy 11.5 Independence Is Won - . the runaway scrape. general sam houston had the task of defeating santa anna so that texans

Chapter 4 INDEPENDENCE! - . section 1: the seeds of unrest section 2: the shot heard round the world section 3:

Texas Independence Won at the Battle of San Jacinto - . chapter 12. the road to san jacinto. the texas cause seemed

Chapter 11 The Chi-Square Test of Association/Independence - . target goal: i can perform a chi-square test for

Chapter 5 Toward Independence - . patriots. also called whigs or rebels believed colonies had right to rule themselves.

Chapter 11: Comparisons Involving Proportions and a Test of Independence - . inferences about the difference between two

We Won! - . articles of confederation. what did we believe about good government?. 1. separation of powers- power divided