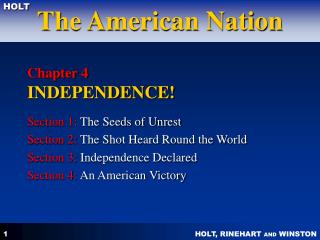 Chapter 12: The Second War for Independence and the Upsurge of Nationalism - . impact of war of 1812. sections were

Issues in Journalism - Independence from faction. issues in journalism. one critic’s view of fox. chapter 5:

Chapter 4 – The Road to Independence - . section 4 – fighting for independence. the siege of boston. after the battle

Chapter 31: The Americas in the age of independence - . ap world history: mrs. zerbst. everything you ever needed to know

Independence Declared - . chapter 4 section . essential questions. how did the declaration of independence explain

How did these independence leaders win independence for their countries? - Simon bolivar miguel hidalgo toussaint

Chapter 30: Independence Movements Sub-Saharan Africa - . africa was the last of the continents to come under european

Chapter 6 The Declaration Of Independence - . 6.1 introduction *most americans were shocked by the news of the battles of