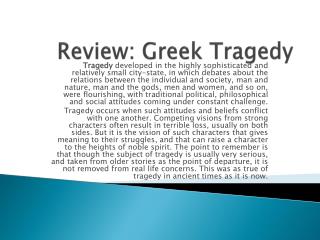 Greek Tragedy - . aristotle’s definition. aristotle defines tragedy as “the imitation of an action which is serious,

Beauty and Art - . the beautiful, the sublime, and the tragic . review. aristotle’s work poetics catharsis explanation

TRAGEDY - . aristotle. tragedy, is an imitation of an action that is serious, complete, and of a certain magnitude; in

Greek Tragedy - . aim is catharsis of spectators, to arouse in them fear and pity and then purge them of these emotions.

Introduction to Ancient Greek Tragedy - . life in ancient greece. greece reached its peek in the 6 th and 5 th centuries,

Greek Tragedy - . an overview of ancient greek theatre . ancient greece. it’s all greek to me! origin of greek

Greek Tragedy in Performance - . skene. definition: a structure facing the audience and forming the background before

Tragedy and Comedy - . the classic definition of tragedy and comedy is simply about the way the story ends: tragedy has a

Oedipus the King - . anticipation guide characteristics of a sophocles tragedy a greek tragedy structure the role of the

Minotaur, Labyrinth, Greek Tragedy and Greek Architecture - . an introduction of the classical period. outline of

Shakespeare’s World - . the philosophies and literary devices that guide othello and hamlet. the nature of tragedy.