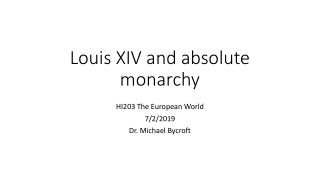 Louis XIV and absolute monarchy. HI203 The European World 7/2/2019 Dr. Michael Bycroft. 1. Political theory 2. Culture 3. Administration. ‘the principle mark of sovereign majesty and absolute power is the right to impose laws generally on all subjects regardless of their consent ’ Louis XIV: Absolute Ruler - . louis xiv uses his clothing to demonstrate his power and status, as his portrait shows. the

Absolute Monarchy - . the scientific revolution, age of enlightenment, and the american revolution . review of the

Absolute Monarchy - . ruler with absolute (total) power. doesn’t have to consult with nobles. common people, or their

Absolute Monarchy - . the scientific revolution, age of enlightenment, and the american revolution issues of disunity

PETER THE GREAT AND LOUIS XIV: ABSOLUTE MONARCHS - . “history is created by those who write it” what does this quote

Louis XIV - . french monarch chapter 5 section 2. goals and objectives. upon completion students should be able to: 1.

Louis XIV - . the ultimate absolute ruler. all others were wannabes. henry iv and sully middle class = civil servants to