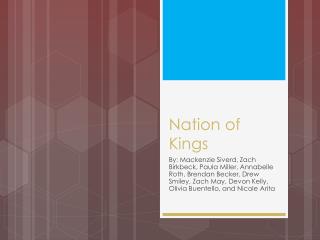 Old Testament Survey: Book of 2 Kings - . downfall and captivity. background. the book’s author and the date of the

Absolute Monarchs Rise of Absolute Kings Preview: - How might having a king with total power be a good thing? explain

King Ælfrǣd - . &quot;king of the anglo-saxons&quot;. king alfred. the great. “great”. name some kings and

Exile for the nations of Israel and Judah - . summary of the history. god’s covenant with: abraham, about 1,900bc

Forging a New Nation - . what type of government did the colonists have during the colonial era?. monarchy  king of

The Power of Kings - . the rise of nations in europe &amp; the end of the middle ages. the church vs. the nation. the

Elijah: God Is There In Our Darkest Days 1 Kings 19:1-21 - . depression is an illness that has plagued many people,