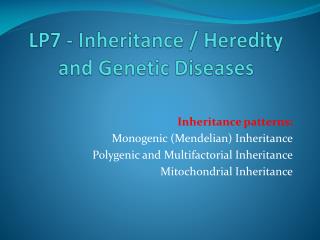 DNA --The Blueprint of Life - . “the twisted ladder”. “the double helix”. deoxyribonucleic acid. the genetic

Genetics and inheritance - . in your own words, explain the following terms. chromosome gene features gametes zygote

Chapter 9 Patterns of Inheritance - . heredity : the transmission of traits from one generation to another. variation :

Chapter 9: Genes, chromosomes and patterns of inheritance 1 - . el: to introduce genetics, with a focus on chromosomes.

Chapter 15: The Chromosomal Basis of Inheritance - . essential knowledge. 3.a.4 – the inheritance pattern of many

Heredity - . fadtp 4-1. we are learning to explain that diversity of species is developed through gradual processes over

Genetic Testing - . overview of genetic testing. genetic diseases often depend on the genotype of an individual at a