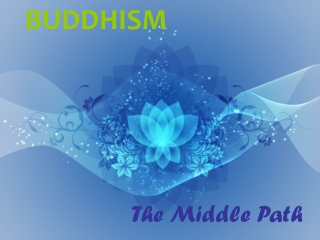 BUDDHISM. The Middle Path. The Essence of Buddhism. The “middle way of wisdom and compassion.” 2,500 year old tradition. The 3 jewels of Buddhism: Buddha , the teacher. Dharma , the teachings. Sangha , the community. Siddhartha Gautama (563-483 BCE). Born in NE India (Nepal).