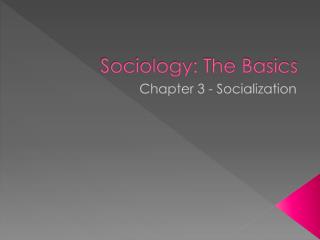 Sociology: The Basics. Chapter 3 - Socialization. Social Experience: the Key to Our Humanity. Socialization – the lifelong experience by which individuals develop their human potential. Humans need social experience to learn their culture.

Social Stratification - . social stratification. for many years, humans lived in hunting and gathering communities. over

Sociology of the Family - . the family. the family is a area of great interest to sociologists especially when set in

Chapter One Sociology: Perspective, Theory, and Method - . the sociological perspective. sociology is the systematic

The Sociological Perspective - . what is sociology?. “...the systematic study of human society ” systematic

Sociological Imagination: - . michael jackson. what do you know about him?. sociological

Sociology of Family &amp; Intimate Relationships - . how do sociologists examine families and their social

The Sociological Perspective and Culture - . by: joyce guianan and ismael n. lopez jr. sociology. as defined is the