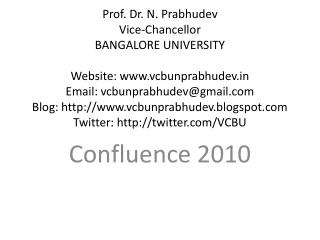 Confluence Park Denver, Colorado - . the city of denver has created a whitewater course as part of a scenic river

Spreadsheets and Technology Confluence - . christopher scaffidi. when is technology like a river?. spreadsheets are a

Confluence Dashboard and WBD Blog - . https://my.usgs.gov/confluence/dashboard.action login or sign up (if first time)