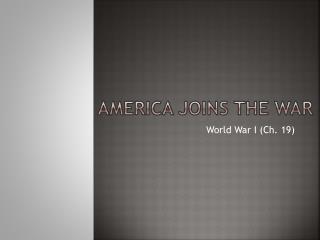 From Neutrality to War - Chapter 22. from neutrality to war. the united states tries to stay neutral. factors that lead

The End of WWI, and the Treaty of Versailles - . m. diluccio. events of 1917. america joins the war with the allies

Ch 19, Sec. 2 America Joins the Fight! - . examine the reasons why the united states helped the allies to win the first

13.4 America Enters the War - . i. the isolationist debate. by 1940, most americans favored limited aid to the allies the

From Neutrality to War - . 19.1. objectives. identify the causes of world war i describe the course and character of the