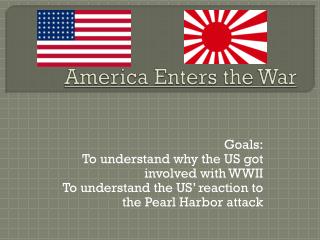 America Enters the War. Goals: To understand why the US got involved with WWII To understand the US’ reaction to the Pearl Harbor attack. Japan is Threatened. America’s presence in Guam and the Philippines and support of China posed a threat to Japan

America Enters the World Stage - . the annexation of hawaii . why did americans have interest in hawaii? . sugar

13.4 America Enters the War - . i. the isolationist debate. by 1940, most americans favored limited aid to the allies the

US Enters the War - . why and how. pressures to end neutrality:. russia exits the war (bolshevik revolution) us business

World War II in Africa and Europe - . america enters the war. millions of americans (from all ethnic / racial groups)

World War I and its Aftermath - . the united states enters world war i. learning targets. after this lesson you will: