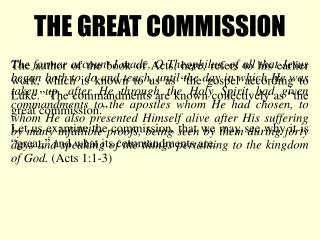 THE GREAT COMMISSION. The author of the book of Acts, here, refers to his earlier work, which is known to us as “the gospel according to Luke.” The commandments are known collectively as “the great commission.”

The Great (Re)commission - . jonah 3. jonah’s obedience. “the word of the lord came to jonah son of amittai,

Cybermissions - . the intentional front-line use of computers and the internet to facilitate the great commission. the

The Commission on Health Care Facilities in the 21 st Century - . established by the governor and the state legislature