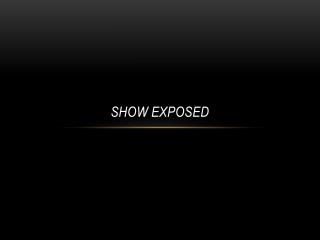 SHOW EXPOSED. THE STORY LINE. A funny show that makes fun of other TV shows, kind of like Video On Trial, but making fun of TV shows. Celebrity guests come on for each episode, and they help us make fun of videos being made fun of.

a graph that uses symbols to show data - . pictograph. the number that is the result of multiplying 2 or more factors

What the Nuer film did not show us: - . the rainy season. agriculture. the civil war. the nuer film did show us (in large

Instructions for operating the game: - The game is played in slide show mode (select slide show, view show from menu)

Quiz Show - . dr. jinan darwish 26th september, 2013. 1. a deficiency of which of the following vitamins is associated

To Do - . addm – add chart showing advice over time client id – draw sessions and client bouncing from session to

SOCIAL, EMOTIONAL, AND BEHAVIORAL FUNCTIONING OF CHILDREN EXPOSED TO MEDICAL TRAUMA: A THEORY OF HARDINESS - . robert b.

New York revs up for auto show - The 2012 new york international auto show will run from apr. 6 - 15 at the jacob javits

Lead - . information for community members. web cast objectives. what is lead? where is lead found? how are people